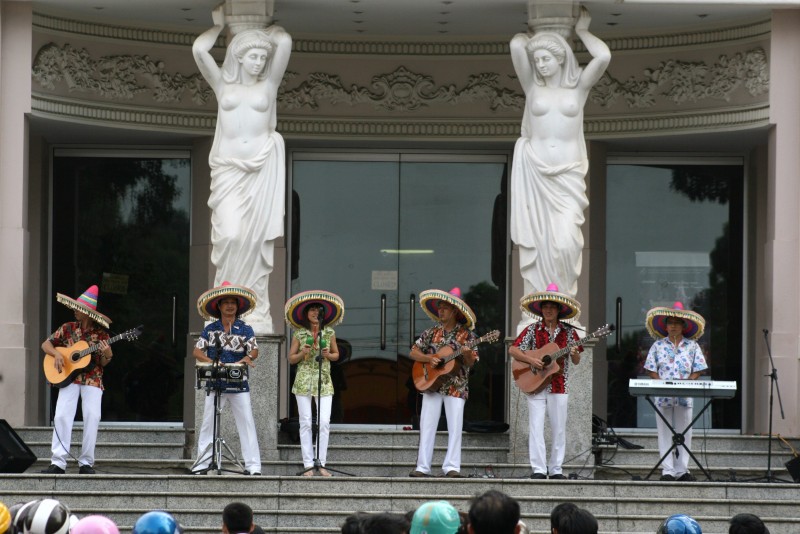 A performance at the Opera house

Located in the city centre, only 10 minutes walking from Ben Thanh market, the City Opera House is one of the must-see places, particularly for those who are interested in architecture and history.

When successfully controlled the Southern of Vietnam in 1863, the French set up a place for top officials to entertain, however, it was just a small and temporary house. By 1898, the new Opera House was started to be built right next to the old theater and completed two years later. It hadn’t become official until January 1900 with a totally new appearance. The theater was designed by a group of French architects - Félix Olivier, Ernest Guichard and Eugène Ferret – under the flashy architectural style of the Third French Republic. The building is characterized by skillful coordination between architecture and sculpture, in which, decorative sculptures are highly valued. Even exterior or interior are well covered with many reliefs and statues.

Particularly, The Opera House was influenced quite clear in the art of Petit Palais Museum (where showcases many works of art from the ancient to the late 19th century) built the same year in Paris, France.

During the war, the opera house witnessed several pauses in its operation. In 1955, it was rebuilt and used as the Republic of Vietnam’s Parliament. In 1975, after the reunification, the new government returned it to its original purposes. In 1998, in the remark of Saigon’s 300 years old, the government decided to restructure with the aim of preserving the original architecture. Since then, there are no changes in architectural style until now.
The City Opera House is featured by the Western architectural style. In front of the building stand two half naked women called “The Goddess of Art”.

The Opera House was two meters higher than the road surface and established with the double soundproof door system preventing street noise. Inside, it could contain 1800 people with three floors. A wide range of art performances are presented here to the public, making it more attractive for “culture vultures”.

Was recognized in 2012 as a national monument, The Opera House is still holding many important cultural art events of the city. When traveling in Ho Chi Minh City, do not miss any chance watching the AO Show as well as visiting this Opera House. AO Show includes several different editions base on different stories. Publicized showing from 2009, AO Show is becoming more and more popular around the world. Attending this show in order to enjoy the beauty of the Opera House from the inside will be a joyful activity in Saigon.

In this area, you can also see these interesting places such as: Saigon Central Post Office, Notre Dame Cathedral, Nguyen Hue walking street and Saigon Square (a shopping center).