[SAIGON] What is BROKEN RICE? 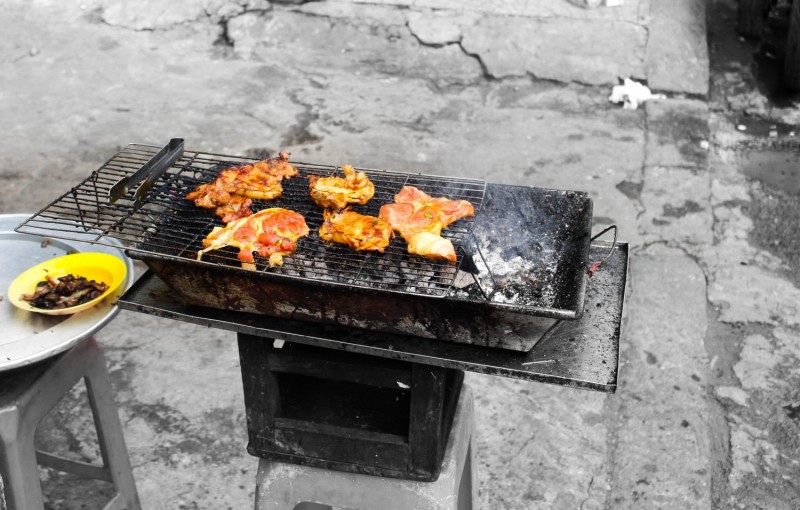 In front, the smoke from a stove spreaded in the air and attracted passenger with its smell, a flavourful smell of pork meat was being grilled one by one. With different recipes, flavour also change in different food stalls and you could not find the same taste in two places.

It was a beautiful morning with all the sunshine at every corner in Saigon. I was wondering what gonna eat to fill my stomach. It was starving and roar louder and louder.

Suddenly, the smell from a small food stall at street side caught me nose. Light pulp showed up! "Ohh! That's what I need".

It is not a big restaurant with air-conditioner inside, you will be disappointed if you think that street food will be served in a shiny table with well-done staff always available every single time. Don't expect too much, most of Vietnamese people enjoy street food right on pavement, at a little food stall beside the street and that was how I experience my breakfast.

The "restaurant" is right at the cross road near a hustle market in District 1. It is an open-space with a small stall with all the inredients big enough for the owner to prepare your dish inside.

In front, the smoke from a stove spreaded in the air and attracted passenger with its smell, a flavourful smell of pork meat was being grilled one by one. With different recipes, flavour also change in different food stalls and you could not find the same taste in two places.

The meat was full of unique spice and was grilled on a stove until brown on the cover, but it was not dry as appearance. It was still juicy enough to contain all the flavour inside. This beautiful slice of grilled pork will be served with rice, called broken rice. The name was given after the process of separating rice shell, some rice seed had been broken and sold in cheap price. This kind of rice used to be a neccessary food for those who was poor and not enough money to buy the whole seed.

Time flied, broken rice became popular and well known as its unique flavour. And this kind of rice is only be found in the South of Vietnam, especially in Mekong Delta and Saigon.

As famous for fish sauce, Vietnamese cuisine is just completed by an addition of fish sauce. And Com Tam is not the exception. However, it is mixed fish sauce, taste with a little chilli. Sweet, sour and spicy fish sauce that help to increase Com Tam's flavour.

Honestly, you can find Com Tam in any restaurant around the world. But in Vietnam, it is much more different, much more delicious and much more original. We eat Com Tam at the morning, afternoon, evening or even midnight. And we do believe that it is different every single time.