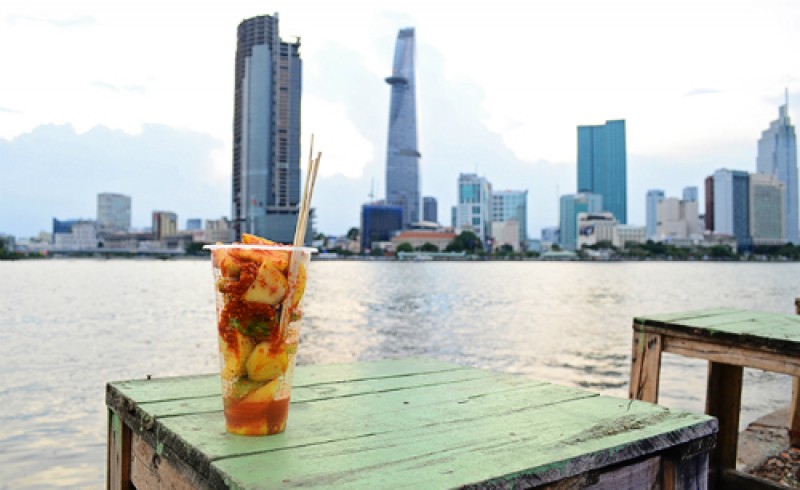 There is a very attractive place for those who like to take pictures, sight seening at night is the roof of Thu Thiem tunnel belonging to Thu Thiem tunnel work. Thu Thiem tunel is one of the new building Anchor, located right next to Saigon River, in District 2, you should visit once.

Thu Thiem Tunnel’s Rooftop - One of the ideal destination of the people of Saigon and those who like to take pictures of the city at night.

Saigon - one of the most famous cities in history, culture, attractions has attracted many domestic and foreign tourists since decades. The famous places are located in the heart of the busy district of the city such as Notre Dame Cathedral, Independent Palace, City Post Office, Ben Thanh Market ... certainly can not be ignored. Saigon also has many interesting things for guests away. You can go to cafes, luxury restaurants or bars in the evening ... But there is a very attractive place for those who would like to take pictures, sightseeing at night is the roof of Thu Thiem tunnel. Thu Thiem tunel was just built years ago, located right next to Saigon River, in District 2, you should visit once.

In order to promote economic development, connecting Districts 1 and 2 will be closer, during the 6 years of construction from 2005 to 2011, the tunnel project of Thu Thiem completed in the joy of the people andcity. From here, Saigon has changed and became anew face. Thu Thiem Tunnel connects the city center and District 2 together through the romantic Sai Gon River, which plays a very important role in the socio-economic development, the great meaning of people’s  The work has removed the gap between the rich and poor in 2 areas. Before, to move from District 2 to District 1, people had to wait for each ferry, squeeze each other, District 2 is still a wild area, Thu Thiem District is like a small oasis. Nowadays, the wasteland has become a crowded urban center, when the completed work have created a healthy entertainment space for all ages by the  tunel’s  rooftop where you can stand and take beautifulphotos and Thu Thiem park runs along the river for about 2km, an ideal place to watch the city at night, the rooftop is an ideal shooting location and away from the bustle of the city.

The best time to come here is in the late afternoon, at sunset and at night. From the center of District 1, when going through the tunnel will be Mai Chi Tho street, District 2, go straight, then you turn left and go straight you will see the Thu Thiem tunel’s rooftop along with Thu Thiem Park opposite District 1. When you look to center you will see the city at night as a replacement for a new clothe, you can take beautiful photos with the lights of the courts. High-rise buildings such as: Time Square; Bitexco Town - the tallest building in the city with 68 floors ...

Then you can walk along the park, watching the romantic Sai Gon River. There, you can watch the big ships, the containers go around river. After walkingalongThu Thiem Tunnel’s Park, there are many familiar goods with snacks that contribute to the city's richness, such as: mixed rice cake, grilled corn, baked sweet potato, fried fish ... which are very familiar with young people coming here. All that simplicity has created the typical culture of Saigon. You will also meet many groups of young people gathered, sitting in groups, eating together, talking with each other. And sometimes, many photographers come here to take pictures too. As late as the night, the number of people come here more busy, especially the weekends or holidays because it is the free time after hard work days.

From the city center, you can catch the Taxi about 4-5 km, or if you like the experience you can rent a motorbike to visit. Do not forget to bring a camera to record the memorable moments of your trip to Saigon familiar. Enjoying the atmosphere and enjoying the fresh air at night helps you understand more about the culture and life of the Saigon people.